skip to main | skip to sidebar

When i wake the smell of beans roasting

I had been dreaming of her for years, a coffee robot that would wake before I do and have the coffee hot and piping. I finally found her in San Francisco, and though this one seems more designed for tea, I'm sure she'll learn to make a mean cup of joe. 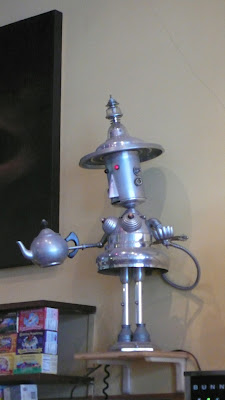 "Full fathom five thy father lies,
Of his bones are coral made,
Those are pearls that were his eyes,
Nothing of him that doth fade,
But doth suffer a sea change,
into something rich and strange,
Sea-nymphs hourly ring his knell,
Ding-dong.
Hark! now I hear them, ding-dong, bell."
- The Tempest

Upon the death of her comrade Elizabeth Cady Staton, Susan B. Anthony lamented
"I am all at sea -but the laws of nature are still going on with no shadow of turning".


I have been pondering the sea as of late. It all began with a failed grant proposed to the Jerome Foundation requesting funds to sail to the antarctic to re-trace Captain James Cooks' search for the mythical Southern Continent. And though this dream still slogs along, I have meanwhile set my sights closer to home and now simply take long walks along the harbor considering the history and nature of sea voyage and all those that have been sea changed.

On a recent outing with my mother, the lovely Carol Kahn, I visited the Met for a show on Beyond Babylon. The show traces the networks of trade and the movement of lusciously obscene precious materials (I must get one of those hammered out gold headpieces inlaid with lapis lazuli for my next party) from Syria, Mesopotamia and Egypt in the South to Anatolia, the Caucasus, and Greece in the North. The heart of the show is the Uluburun Shipwreck - a ship that went down off the coast of Turkey about 3400 years ago. 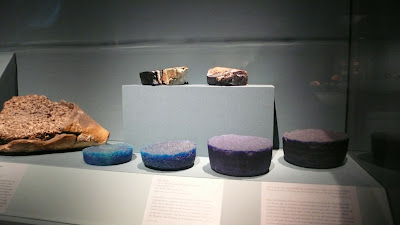 The ship carried goods from 12 cultures. Here is a partial list of some of the finds dredged up from the bowels of the sea by the Institute of Nautical Archaeology between 1985 and 1994.

1 ton of terebinth resin for perfumes, in Canaanite jars

Acorns, almonds, figs, olives, pomegranates (ok these weren’t really dredged up – but they were stored on the ship and they do sound tasty)

A bronze pin with globular head (A personal favorite of mine)

A gold scarab bearing the name of Nefertiti

A sword of Itlaian Origin