skip to main | skip to sidebar

Carousel: in an effort to forget less 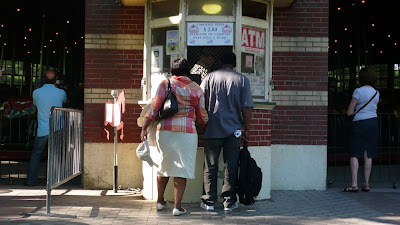 Carousels for me rouse a nostalgia that is borne both of the iconic images of the ride, and by the personal memories I have associated with them.

When I was barely 13, a boy with a blond mohawk - who had recently burrowed his way into my young heart - and I went for a bike ride. It was a weekday afternoon. We rode from our school in the upper reaches of the city down the spine of Central Park. Not quite sure if we were on a date, we stopped at the carousel, enclosed in its brick facade as though the horses might run wild if there were no walls to prevent them.

Strangely the actors Danny DeVito and Rita Perlman were sitting on the nearby benches. They seemed trustworthy as we saw them on television regularly. We asked them to watch our bikes, which they agreed to, and we on our unsure date went to ride the painted ponies.

Years later in a short film I made, my father is riding a carousel in the south of France. It is three summers before he died. The image is indistinct and washed out, and he turns away from the camera just before I am able to adjust the focus. As the leader on the film runs out, it mimics the color of the horses. Red, orange, yellow, black in a blur.
Posted by Holen Sabrina Kahn